As airlines take delivery of their new long haul aircraft they often put them into service on domestic routes on train pilots and crew. Americans fleet of 787-800s is slowly growing and in the new year you will have the opportunity to try one of them out between Dallas and Chicago before it goes into international service.

Flight times vary between January and March but it seems to be flying almost every day. If you happen to be traveling between the cities this is definitely the way to do it as the planes will be brand new and much more enjoyable than a 737.

These flights will have the international seat configurations so paying the extra for first/premium economy or using miles is definitely recommended.

The route is currently available for 15,000 Avios or 25,000 AA saver points if you want to use miles and travel up the front.

Every few days a new 787 Dreamliner rolls off the production line at Everett outside Seattle before heading off to airlines around the world. Some go straight to work in long haul routes while others are used domestically for a period of time to train crews and pilots.

Qantas will shortly be receiving their first 787-900 aircraft and it will put it to work domestically in November. Routes will be Melbourne to Perth and Melbourne to Sydney and will run from early November to mid December before the aircraft goes on International duty. If you need to travel between these locations and have some Avios to spare it is a great way of doing it. Sydney to Melbourne costs just 9,000 Avios in Business Class with a minimal fee.

Currently these flights are still being advertised as A330s on booking systems but you are able to see the new business class seating layout as below. It appears premium economy seats are also being sold as normal economy on these flights which will be good value for cash fares.

If you are in Australia and need to travel between these cities why not give this 787-900 a go. There’s something special about a plane straight off the production line and it will be much more comfortable than the usual 737s on these routes.

Unfortunately this plane will be flying International when I’m in Australia next year. But I will get to fly their A330 for those 9,000 Avios so all is not lost….

While most of the media attention today has been on Qatar Airlines CEO Akbar Al Baker’s choice words around American Airlines air hostesses, many seem to have missed the fact that the airline today officially launched a daily service from Dublin to Doha using the Boeing 787 Dreamliner.

Emirates and Etihad already have twice daily services to the gulf, with Qatar bringing the total to 35 flights a week to Dubai, Abu Dhabi and Doha respectively. For a country as small as Ireland this is a significant amount of seats to fill. Even if the majority of customers only transit through the Gulf.

A quick look on google flights show that they haven’t come to mess around either offering lower fares in September on the three routes I looked at. 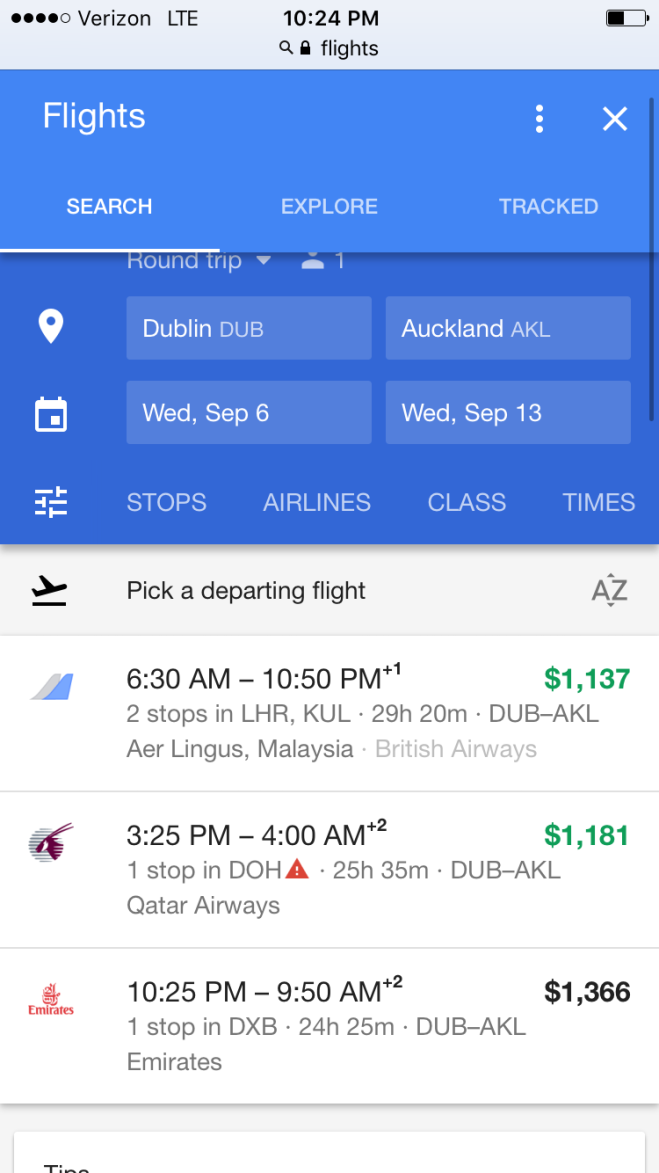 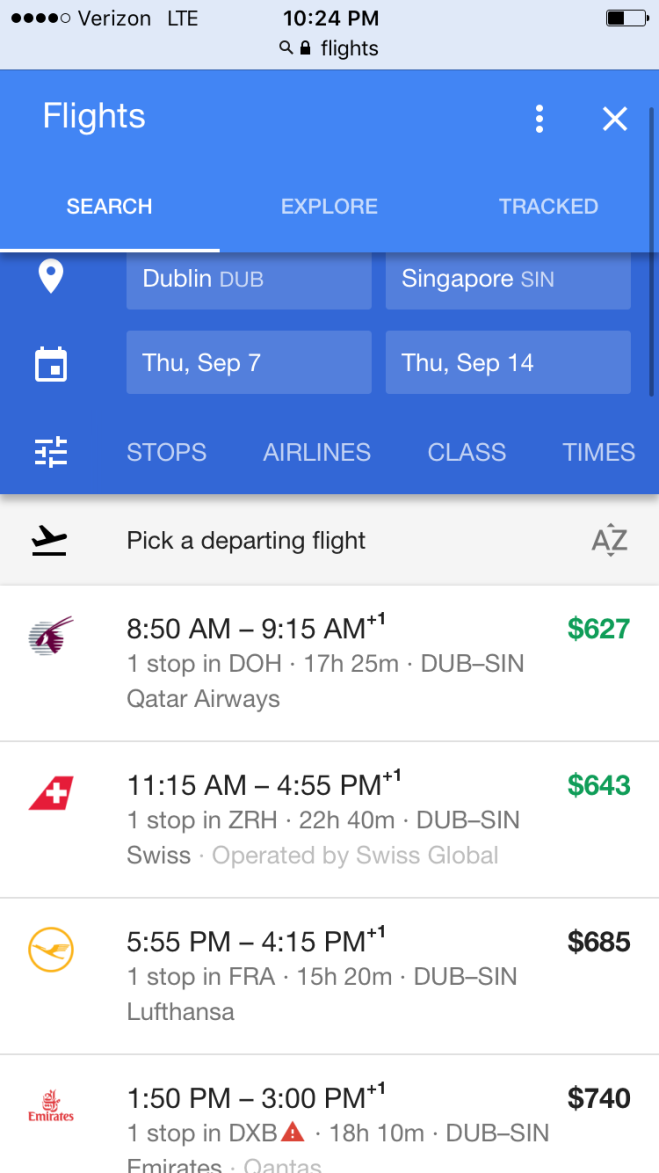 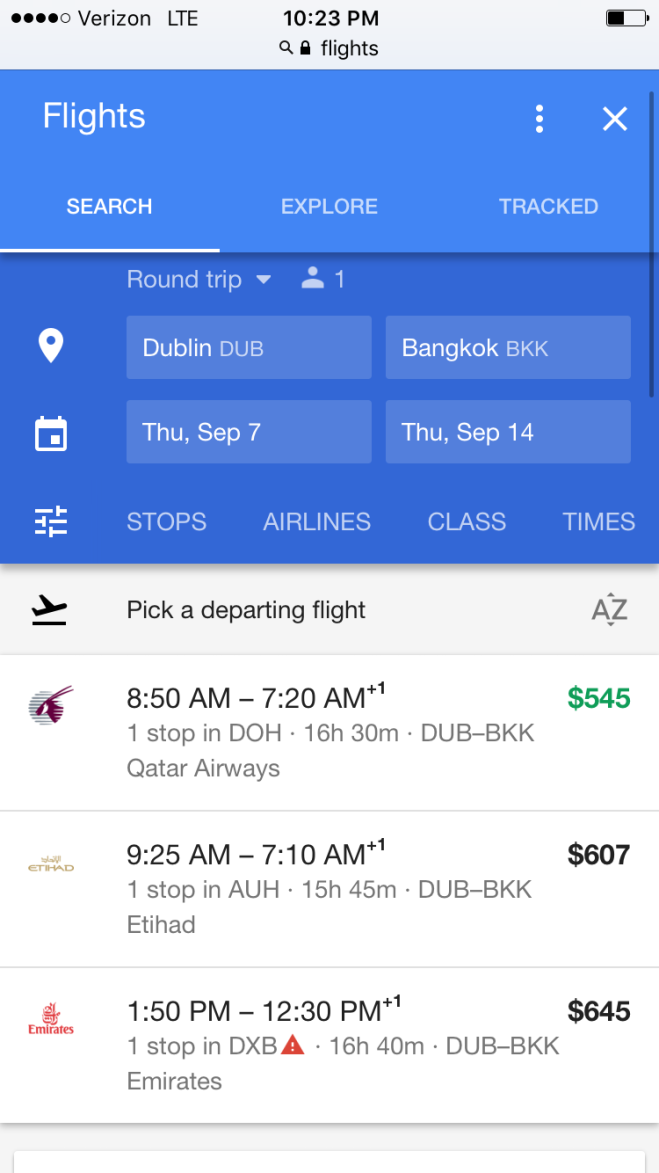 While the fare differences aren’t huge Ireland is a particularly price sensitive market. Many customers will also be attracted to the newer aircraft and arguably better service on Qatar.

It will be interesting to watch this one play out. Having flown a few times to Abu Dhabi from Dublin, none of my flights have been full. The extra capacity can only affect this further and at the very least make the first leg of a journey with one of these carriers in economy more comfortable.

Once again British Airways staff have decided to strike, but this time to try and reduce the disruption BA have agreed to ‘wet lease’ 9 of Qatars A320/321 aircraft. These planes would have been otherwise grounded due to the issues they have locally in the Middle East.

As of today these planes are in the air operating BA routes around Europe and will definitely offer a much improved seat in Club Europe and service by Qatar cabin crew should also be an upgrade.

We are currently trying to confirm what routes these are being operated on as the Avios program offers very good value redemptions in Club Europe so it could be a very good time to go for a last minute redemption to try out this product. The problem BA will have is that their customers might enjoy this a little too much and won’t want to go back. 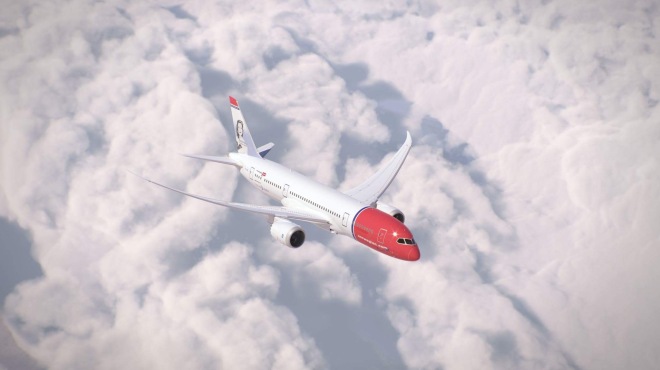 When Ryanair started out everyone was used to legacy carriers many look back with fond eyes of a barely edible meal and some very cheap undrinkable wine. Ryanair stopped serving the un-edible meal and charged you for the wine. They went back to basics getting people from A to B for a very cheap price, which is what most people care about. Slowly but surely the legacy carriers followed cut after cut after cut to the point where they are all pretty much Ryanairs. I’m not a huge fan of Marks and Spencer’s sandwiches on the ground and not hugely excited about the prospect of paying BA for one in the air when the opportunity arises. Peoples expectations have changed, helped no doubt by the US carriers. A six hour trans continental flight on United or American in a middle seat is a lot longer than anything Ryanair offers, yet the service is the same if not worse.

So as time has gone by the inevitable has happened “low cost” transatlantic flights from “regional” airports. This week we had $55 dollar fares from San Francisco to Europe. That’s cheaper than a round-trip Heathrow express ticket. Norwegian started this with direct Routes from Scandinavia and Europe, followed by Wow who operate from Iceland and have connecting flights all over Europe. However the next phase is maybe the most interesting with Norwegians new 737 Ultras flying from the east coast to the UK. Something that nobody Michael O Leary included thought possible a few years ago.

The “New York” flights will operate out of Stewart airport in New Jersey about 90 minutes from midtown Manhattan, far from convenient but for $200 round-trips to Dublin will make visiting home easier for many people. The once or twice a year trip can be a lot more often if fare levels stay the same. So far the legacy carriers haven’t reacted fares remain in the $600 range going closer to $1000 in the summer months. Presumably they will wait to see how it plays out before making any changes. Norwegian’s issue will be more on the ground than the air, Once people are convinced they can get to the airport they need to make sure security lines/immigration move quickly and prices stay reasonable for food and drink etc. If that works well then the thought of 7 hours on a 737 will be a lot more bearable. If it doesn’t run smoothly then fares alone wont fill those planes.

I’ll be taking my first trip next month $65 to Edinburgh. I won’t be beating that anytime soon.